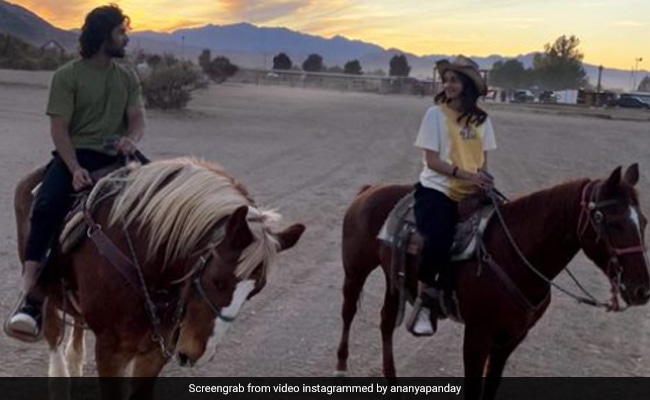 Ananya Pandya is living it up in Las Vegas while shooting for her next film with Vijay Deverakonda. The two heartthrobs are starring together in the much-awaited film Liger and have been sharing updates from the American city much to the delight of their fans. And, what are the two up to? A lot of fun things clearly, with the latest on the list being horse-riding. Yes, you read that right. Ananya Panday and Vijay Deverakonda are seen going riding horses in a new post by the actress. Sharing the fun pictures on Instagram Stories, Ananya Panday wrote, “Howdy Rowdy,” tagging Vijay Deverakonda. For the unversed, “Rowdy” is a moniker given to Vijay Deverakonda by his fans. He even has a clothing brand named Rowdy Club. 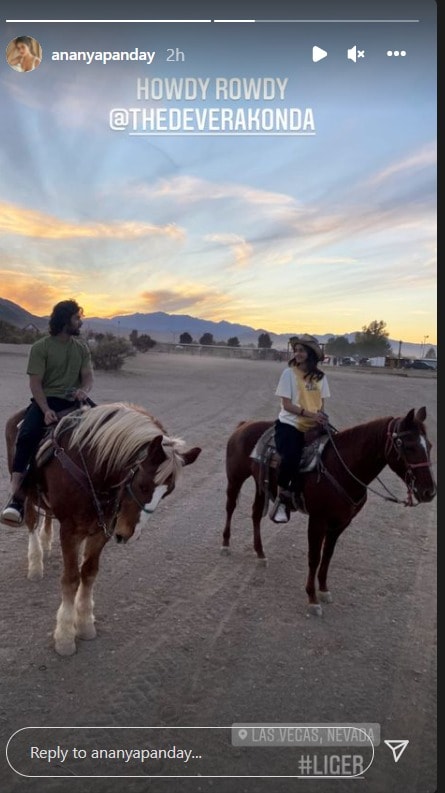 We got a closer look at Ananya Panday in her riding gear thanks to a set of pictures that the actress shared on her Instagram timeline. In the images, the actress looks comfortable as she goes riding. In one of the pictures, she is even seen patting a horse fondly.

Sharing the post, Ananya Panday wrote, “Yay or neigh,” with a horse emoji.

A few hours ago, the actress also shared Instagram Stories of the lovely Vegas sky. In a note, she wrote, “You beauty,” with the hashtag, “Liger”.

So what else is Ananya Panday up to in the vast plains of Nevada? Well, she was recently caught brushing shoulders (and cheeks) with legendary boxer Mike Tyson, who will also be seen in Liger. Sharing a cheeky picture with the boxer, Ananya Panday wrote, “We’re clearly getting along really well.”

Ananya Panday is the daughter of Bollywood actor Chunky Panday and entrepreneur Bhavana Pandey. She made her Bollywood debut in 2019 with Dharma Productions’ Student Of The Year 2. She was last seen in Khaali Peeli. In addition to Liger, she will also be seen in a film opposite Deepika Padukone and Siddhant Chaturvedi, directed by Shakun Batra.