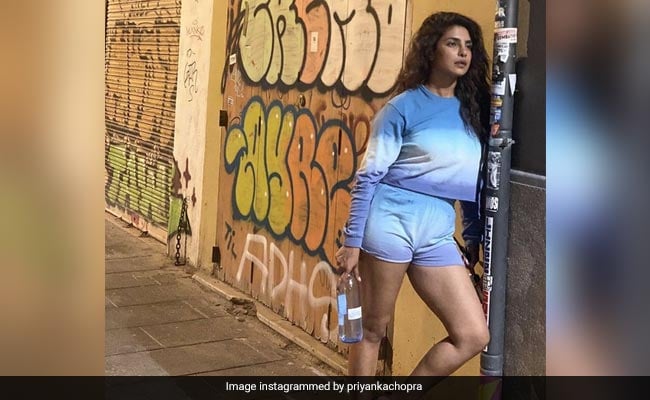 Priyanka Chopra lets out her heart’s musings once again on social media. This time, the actress leaves us with a deep message: Move on. Priyanka posted a photo of herself in the streets of Spain. She stands against a wall with a lost gaze and we see the graffiti behind her. Priyanka has been moving places for her next project Citadel. And, her work has finally brought her to Spain. She wrote in her caption, “If you are not moving forward…You fall back.” She added the hashtag, “Musings.” We’ve seen Priyanka moving forward in terms of places as well as her career trajectory. Here’s her post from Spain:

Priyanka Chopra hasn’t been just musing on the streets of Spain. Her days in Valencia were spent in mirth as she went out with her mom and close friends during a day off. In the photos, the group is enjoying their time to the fullest. Priyanka turns into a water baby in her photos. She is seen spending quality time with her mother, friends and a pet pooch. Needless to say, she looks stunning in her vast range of stylish outfits. We also see her riding a speed boat in one of the slides. “A perfect day off,” Priyanka wrote in her caption.

Priyanka Chopra has also been giving us amazing behind the scenes glimpses from the sets of Citadel. In one such photo, we see her silhouette standing on wet ground. Against her figure, we see a range of hills in the distance. The photo seems to have been clicked at dawn or dusk, with the Sun quite low in the sky. Priyanka’s caption hyped up our anticipation for the upcoming series. She wrote, “Facing fears like the warrior she is… can’t wait for you to meet her.” Here’s her post:

Before Priyanka Chopra landed in Spain, she was enjoying “an evening in Paris”.

The times spent in London during the summers stay memorable in Priyanka Chopra’s mind. The actress once posted photos from her summer album, only to bid goodbye before fall set in. “Summer, you have been good to me,” she wrote in the caption. Her hashtags read, “Goodbye Summer” and “Hello Fall.”

Priyanka Chopra will next be seen in Citadel, which is a multi-series production. She also has Matrix 4 in her pipeline.