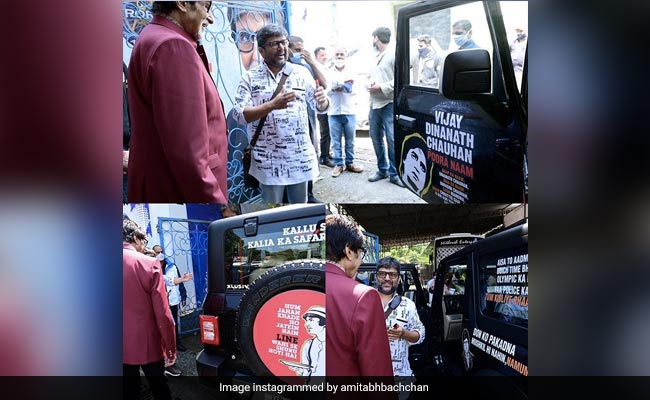 Big B with his fan and the car. (Image courtesy: amitabhbachchan)

An excited Big B shared the picture with the fan and the car and he wrote: “He has painted his entire car with dialogues from my films .. and his shirt has all the names of my films …When you open the door to the car the sound system starts playing my dialogues. This is simply quite amazing… He has just bought this car the THAR and has not driven until I signed an autograph on the dash board .. I did .”

In terms of work, Amitabh Bachchan has several film releases lined-up this year, which include Ayan Mukerji’s Brahmastra, co-starring Alia Bhatt and Ranbir Kapoor. He will also be seen in the sports drama Jhund. The actor recently signed the Hindi remake of the Hollywood film The Intern, in which he will co-star with Deepika Padukone. He will also star in Vikas Bahl’s upcoming directorial project Goodbye, also starring, Rashmika Mandanna and Pavail Gulati. He was last seen in Chehre, alongside Emraan Hashmi.