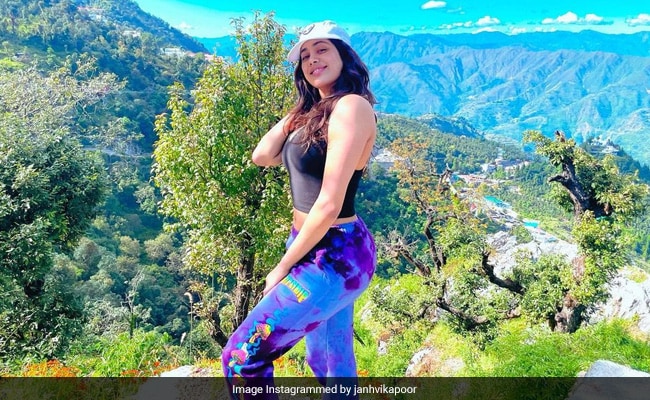 Trust Janhvi Kapoor to fill your Instagram feed with breathtaking pictures of nature. The actress, who often shares pictures from her days well-spent close to nature, did something similar on Tuesday. She posted mesmerising photos from her outing with her friends at an undisclosed location, where everything was dreamy – rainbow, mountains, clouds and greenery. In some images, Janhvi Kapoor can be seen chilling and having lots of fun with her friends while others are solo pictures of the actress posing against scenic views. Sharing the photos, the actress wrote: “somewhere over the rainbow.”

Janhvi Kapoor, who made her acting debut with Shashank Khaitan’s 2018 film Dhadak,loves spending time in nature’s lap. Earlier this month, she posted these incredible pictures.

And a few days later, she painted Instagram green with these pictures. She captioned them: “Flower child. Child of the moon, raised by the sun, in a world walked by stars and a sky drawn with flowers.”

After Dhadak, which is a Hindi remake of Marathi hit Sairat, Janhvi Kapoor starred in Netflix’s anthology Ghost Stories, where she featured the Zoya Akhtar-directed segment. The actress’ next project was Dharma Productions’ Gunjan Saxena: The Kargil Girl, which also starred Pankaj Tripathi and Angad Bedi.

Janhvi Kapoor was last seen in Roohi, co-starring Rajkummar Rao and Varun Sharma. She has a couple of films lined up such as Karan Johar-directed Takht, Good Luck Jerry and Dostana 2, which marks her third project with Dharma Productions.