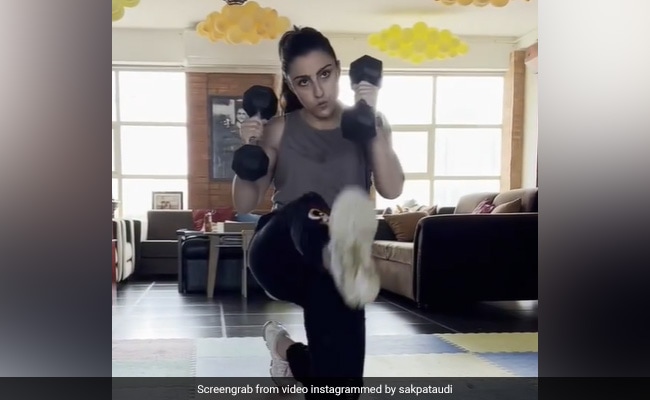 Soha Ali Khan in a still from her video. (Image courtesy: sakpataudi )

Need Wednesday motivation? Soha Ali Khan is here to help. The actress is back with her weekly workout videos. This time, she posted a clip of herself practicing a “military style workout.” Yes, you read it right. Her trainer selected this new workout routine for this week because for him, “civilian was just too blah.” Soha captioned her video: “It’s that time of the week again and this time it’s a military style workout! Because civilian was just too blah for Mahesh.” She added the hashtags such as #wednesdaymotivation and #workout.

Last week, Soha showed us how to do “single leg skipping and tennis ball balance push-ups” like a pro. Her caption read: “Never a dull moment during our Wednesday workouts with Mahesh! Just when you think you’ve nailed it there’s a twist … single leg skipping, tennis ball balance push-ups and what can only be described as snake push ups! None of these are technical names for the exercises but what’s in a name?? – as long as it’s working!”

Soha Ali Khan married actor Kunal Kemmu in 2015 after dating for a few years. The couple welcomed daughter Inaaya Naumi two years later in September 2017. Soha and Kunal have co-starred in films such as 99 and Dhoondte Reh Jaaoge.

Badshah with Big B. (courtesy amitabhbachchan) Highlights Badshah visited the […]

November 27, 2021
admin
Leave a Comment on Just Amitabh Bachchan Trying To Be A “Cool Dude” (His Words)

November 27, 2021
admin
Leave a Comment on Sunny Deol’s Son Karan, 31 Today, Got The Best Wish From His Dad

Bhagyashree with her husband in a still from the video. […]