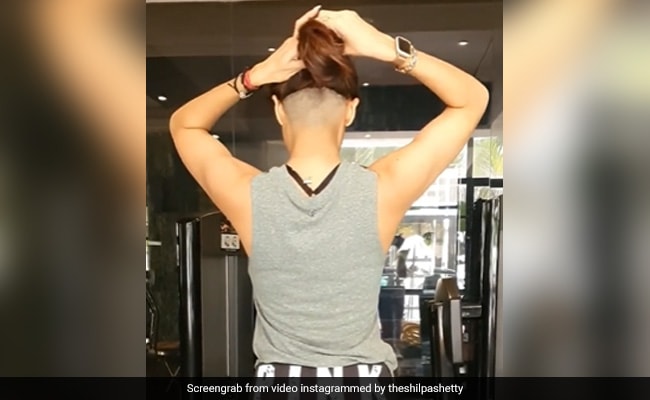 Shilpa Shetty, it seems, is a firm believer in taking risks. The actress has now won Instagram over with her bold new hairstyle as well as a demanding workout routine that has fans cheering for her. Sharing a video in which she shows off her new look and her aerobic workout, Shilpa Shetty wrote, “You can’t live each day without taking risks and without getting out of your comfort zone: be it going for an undercut buzz cut (which took a lot of gumption, won’t lie) or performing my new aerobic workout: the “Tribal Squats”.”

Explaining further Shilpa Shetty wrote, “It works on all lower-body muscles, shoulders, arm-and-leg coordination, speed and agility, and most importantly – on our brain and body. The routine entails doing 4 sets of 60 seconds each with only a 30-second break in between each of them. Put in the effort consistently to see the difference because like they say, “No Guts, No Glory.””

Shilpa Shetty’s fitness videos have a fan base of their own. In another clip that grabbed a lot of eyeballs on social media, the actress is performing Shirshasana. “Sometimes, things need to be turned on their heads to get a better perspective. The Shirshasana helps me do just that! It is also the king of asanas. It helps me clear my mind, align myself; and helps strengthen the core, shoulders, and arm,” the caption read.

No matter what Shilpa Shetty does — acting, dancing and entrepreneurship — she makes sure that all her fans sit up and notice. Recently, the actress shared a Reels on the occasion of Navratri in which she is seen performing Garba. Posting the video, she wrote, “Shilpa Ka Mantra during Navratri: When in doubt, do Garba. Aye haalo…”