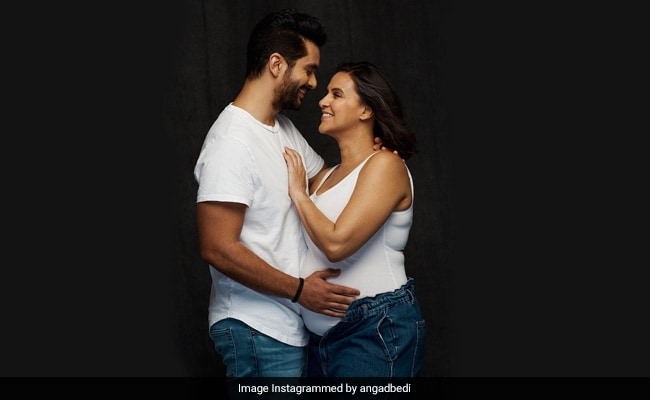 Congratulations, Neha Dhupia and Angad Bedi. The couple welcomed their second child, a baby son, on Sunday. Announcing the arrival of their baby boy on social media, Angad Bedi wrote: “The almighty today blessed us with a baby boy. Both Neha and the baby are well.” Neha and Angad are already parents to a girl named Mehr, who was born in 2018. In his post, Angad Bedi adorably added: “Mehr is ready to pass on the ‘baby’ title to the new arrival. #Bedisboy is here! Waheguru mehr kare. Neha, thank you for being such a warrior through this journey. Let’s make it a memorable one for all 4 of us now.” He also shared a beautiful picture of himself and Neha Dhupia from her maternity photoshoot.

A few hours before Angad Bedi’s post, Neha Dhupia shared a stunning photo of herself from a magazine photoshoot and wrote this about her baby: “Can’t wait to hold you in my arms … #bodypositive.” She can be seen embracing her baby bump in the picture.

Neha Dhupia and Angad Bedi announced their second pregnancy on July 19. Sharing an adorable family photo, unveiling her baby bump, the actress wrote: “Took us 2 days to come with a caption…The best one we could think of was … Thank you, God. #WaheguruMehrKare.

Angad Bedi was last seen in a music video titled Baithe Baithe. His last film is Gunjan Saxena: The Kargil Girl, in which he starred alongside Janhvi Kapoor. Before that, he starred in web-series The Verdict – State Vs Nanavati.