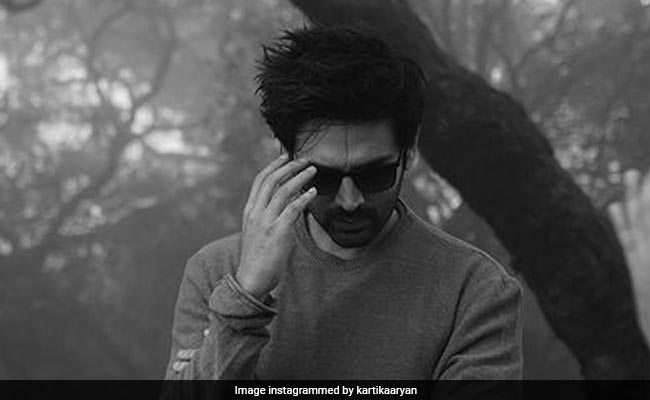 Kartik Aaryan is on a roll. After wrapping up films in quick succession, the actor seems to be finally taking a breath to relax. On Saturday, Kartik Aaryan deviated from his recent work-related posts, to share a detail about himself with fans on social media. The actor confessed that he loves nights. At least, that is what the caption on his latest Instagram post suggests. He wrote, “Nyctophilia,” with a black heart emoji. The one-word caption was attached to a black-and-white image of Kartik Aaryan standing in what appears to be the woods. While fans of the star were thrilled to see the picture, there was a catch that actress Alaya Furniturewalla was quick to point out.

Alaya Furniturewalla, who stars with Kartik Aaryan in the upcoming film Freddy, pointed out that the photo was not exactly clicked at night. She wrote in the comments, “But it’s daytime in this photo.” What are friends for if they don’t call your bluff, eh?

Not one to back down, Kartik Aaryan responded to the comment and said, “But my mind is dark.” To this, Alaya said, “Don’t worry, Diwali is near,” with a heart and laughing emoji. Fans had a blast reading through the fun banter.

Take a look at the image here:

Recently, Kartik Aaryan shared a bunch of images and videos from the last day of the shoot of Freddy. The team marked the last day of filming by signing each other’s T-shirts which has the name of the film printed on them. In the first of the videos and images, director Shashanka Ghosh is seen signing Kartik’s T-shirt.  In the video, Kartik and Alaya are having a conversation. Alaya, who is not in the frame, can be heard saying, “I am going to do my very best.” To this, Kartik tells Alaya, “Do your very best. Give good takes, as usual.”

The team also cut cakes on the occasion. Sharing the post, Kartik wrote, “It’s a wrap. A character that will always stay like a shadow with me.” Alaya replied to the post with several white heart emojis.

Alaya Furniturewalla too shared images and clips from the celebration and wrote, “Ready, steady, Freddy! It is a wrap.” Alaya added, “The most wonderful people. Feeling super blessed and super grateful to be a part of this incredibly special film.”

In addition to Freddy, Kartik Aaryan will be seen in Dhamaka and Bhool Bhulaiyaa 2. Alaya Furniturewalla, who made her debut with Jawaani Jaaneman in 2020, will also be seen in U Turn.