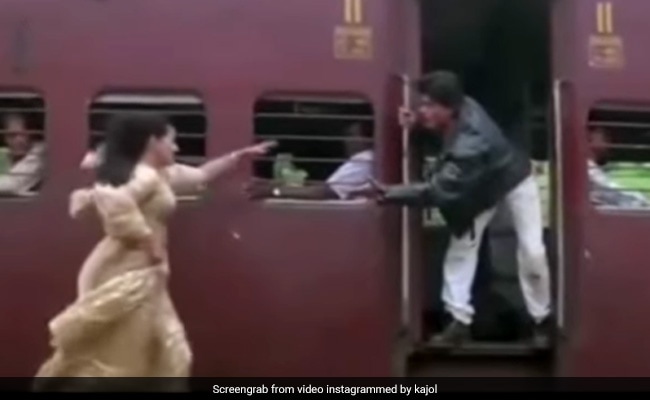 Kajol and Shah Rukh Khan in a still from DDLJ. (Image courtesy: kajol)

Dilwale Dulhania Le Jayenge (DDLJ), a film that defined romance for a generation of cinema lovers in the country, has completed 26 years today. The movie starring Shah Rukh Khan and Kajol catapulted the lead actors to superstardom like never before and has gone on to become the longest-running film in Bollywood history. On the happy occasion, Kajol, who played Simran, shared a clip from the film. She posted a snippet of the iconic climax ofDDLJ that has gone on to become an intrinsic part of Indian pop culture. Along with it, Kajol wrote, “Simran caught the train 26 years back and we are still thanking everyone for all this love.”

The clip shows Amrish Puri uttering the legendary dialogue, “Ja Simran ja, jeelay apni zindagi,” as Simran runs towards Shah Rukh Khan’s Raj, who is on board a train with his hands stretched towards her. Fans have flooded the comment section with praise for DDLJ  and heart emojis.

Shah Rukh Khan, who is going through a turbulent time in his personal life, following the arrest of his son Aryan in a case involving a rave party, did not share any posts on the occasion. However, the superstar’s portrayal of Raj in the classic has become an irreplaceable part of the actor’s illustrious repertoire.

Yash Raj Films, which produced the film directed by Aditya Chopra, also shared a video montage of the iconic scenes and tagged Shah Rukh Khan and Kajol among others.

There is no doubt that the charm of DDLJ has remained intact even 26 years later. On the occasion of its 25th anniversary, last year, the film was re-released in theatres in several countries across the world. Bollywood trade analyst Taran Adarsh in a tweet had announced that the film was re-released in theatres in the USA, Canada, UK, UAE, Saudi Arabia, Qatar, Mauritius, South Africa, Australia, New Zealand, Fiji, Germany, Norway, Sweden, Spain, Switzerland, Estonia and Finland.