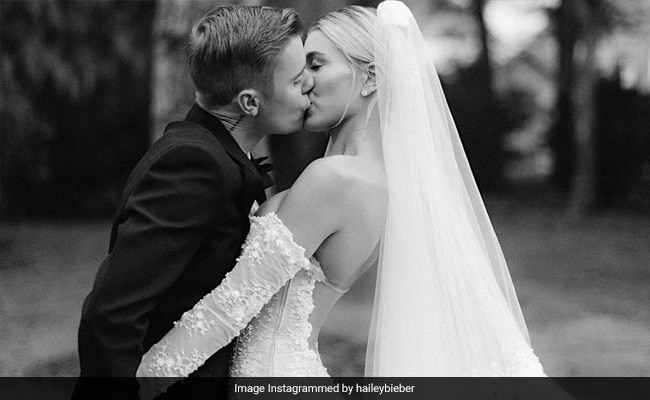 Justin Bieber and Hailey have been married for two years now. On their 2nd wedding anniversary, the couple decided to wish each other with mushy pictures from their wedding ceremony, which took place in South Carolina in 2019. Sharing a set of photographs from the ceremony, Hailey simply wrote the wedding date in her caption. Justin, on the other hand, shared a greyscale picture from the ceremony and he wrote in his caption: “Happy anniversary baby. Love you k. To the moon.” The comments section of their posts were filled up with congratulatory greetings from fans.

This is how Hailey Bieber wished her husband on their second anniversary:

Justin Bieber and Hailey knew each other since they were teenagers. However, it was only in the year 2014 that they began dating. After dating for a while, the couple parted ways but they rekindled their relationship in September 2018 and got secretly married in New York. In October, 2019, the couple hosted a grand wedding ceremony in South Carolina.

Justin Bieber has sang many hit tracks such as Baby, Boyfriend, Sorry, Let Me Love You and I Don’t Care. In a career spanning a decade, the Canadian singer has received several awards and accolades including a Grammy Award for Best Dance Recording.

Hailey, a renowned model, is the daughter of The Usual Suspects actor Stephen Baldwin and graphic designer Kennya Deodato.

October 23, 2021
admin
Leave a Comment on Vin Diesel Walked Paul Walker’s Daughter Down The Aisle At Her Wedding. It’s OK To Cry

October 22, 2021
admin
Leave a Comment on NO TIME TO DIE is a fun-filled entertainer that will give you your money’s worth.

October 22, 2021
admin
Leave a Comment on DUNE is a cinematic spectacle with fine performances. However the lack of buzz, long length, and confusing narrative will affect its box office prospects.