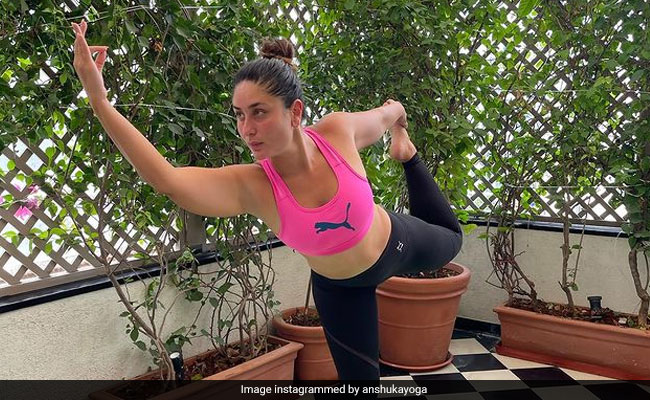 Kareena Kapoor’s fitness rituals veer from workout routines with her buddies to yoga at her place. On Monday, Anshuka Yoga’s official Instagram page shared a picture of the actress doing yoga at her house. Kareena Kapoor, who has been practicing yoga for years, can be seen doing Natarajasana in the picture. The caption on the post shared by Anshuka Yoga read, “Presence of mind, body, heart and soul Beautiful Bebo. Kareena Kapoor so graceful in her Natarajasana.” The picture was later shared by several fan pages dedicated to the actress.

The actress, after the birth of her second child, son Jeh, began working out and shared posts from her fitness diaries. Before her pregnancy last year, several videos of the actress performing Suryanamaskars were shared by fitness instructors and they trended big time. On International Yoga Day, she shared this post:

Kareena Kapoor was last seen in the 2020 film Angrezi Medium, co-starring late actor Irrfan Khan, and actress Radhika Madan. Kareena will next be seen in Aamir Khan’s Laal Singh Chaddha, which is a remake of the 1994 film Forrest Gump. Kareena shot for parts of the film during her pregnancy last year. She will soon make her debut as a film producer as well.

Kareena Kapoor and Saif Ali Khan welcomed a son on February 21. “We have been blessed with a baby boy. Mom and baby are safe and healthy. Thank you to our well-wishers for their love and support,” Saif said in a statement. Kareena and Saif Ali Khan married in 2012 after dating for some years. They announced their second pregnancy last August.