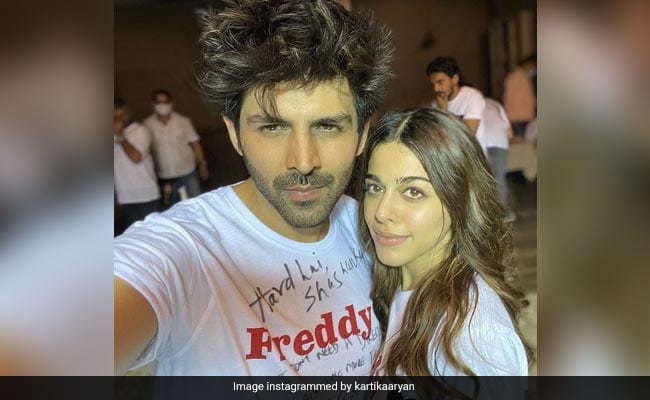 Kartik Aaryan’s social media presence has always given fans a closer look at his personal and professional life. The actor, who is busy with his upcoming releases, has now announced that he has wrapped up the shoot of his much-awaited film Freddy. Kartik also gave fans a look at how the team bid adieu to the movie on the last day of the shoot. In a bunch of videos and images shared on Instagram, the team can be seen signing each other’s T-shirts which has the name of the film printed on them. In the very first clip, director Shashanka Ghosh is seen signing Kartik’s T-shirt.

The video also features a conversation between Kartik Aaryan and Alaya F, who is playing the female lead in the movie. Alaya, who is not seen in the frame, can be heard saying, “I am going to do my very best.” Like a true encouraging co-star, Kartik tells Alaya, “Do your very best. Give good takes, as usual.”  When Kartik asks Shashanka Ghosh what he has written on the T-shirt, the director says, “Ghar jaake padna [Go home and read].”

In the next slide, Kartik Aaryan is posing for a selfie with his leading lady. That’s not all. He followed this up with images with the whole team. We also get a bird’s eye view of the team cutting cakes to celebrate the last day of the shoot.

Next up is a video featuring Kartik Aaryan and Shashanka Ghosh. In it, Kartik asks Shashanka. “Sir, iske baad kya shot hai? [What is the next shot?]” Addressing Kartik as Freddy, Shashanka replies, “This is the last shot of the film. The first shot was yours, the last shot is yours.”

Along with the bunch of photos and videos, Kartik wrote, “It’s a wrap. A character that will always stay like a shadow with me. Freddy will see you at the theatres.” Here, we can’t help but talk a bit about director Farah Khan Kundra’s reaction to the post. “How fast are you finishing movies?” she asked. To this, Kartik replied, “Farah Khan, isliye bol raha hu jaldi writing khatam karo [This is why I am asking you to complete your work fast].” Can you smell something?

Actress Alaya F also shared some glimpses on Instagram. “Ready, steady, Freddy. It’s a wrap. The most wonderful set with the most wonderful people. Feeling super blessed and super grateful to be a part of this incredibly special film,” she wrote in the caption box.

Previously, Kartik Aaryan had shared an image from the sets of the film in which he is seen diving into some yummy food. With plates of dosa, jalebi and other Indian delicacies in front of him, Kartik said, “Ye toh sirf starter hai [This is just the starter]. Freddy’s diet.”

Kartik Aaryan even shared a photo of the movie’s clapboard with “climax” written in the scene column. Sharing the black-and-white image, Kartik Aaryan said, “Climax pe climax [climax after climax].”

Given the absolute charmer that he is, Kartik Aaryan also sent a cake to welcome Alaya F on board. “Welcome Alaya. From, Freddy,” the post read.

In addition to Freddy, Kartik Aaryan will also be seen in Dhamaka, Bhool Bhulaiyaa 2 and Captain India.