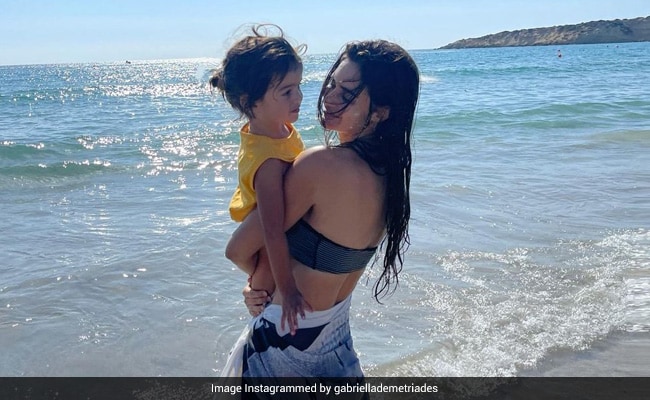 Dreaming of the ocean? Well, Gabriella Demetriades is living the dream in Cyprus. The model shared a bunch of pictures on Instagram on Sunday in which she is seen enjoying some quality time on the beach. And she is not alone as she basks in the warmth of the sun. The stunning model is seen with her family, having a gala time in the water. While in one picture she is seen with her son Arik, in another image she is posing for a selfie with her family. In the caption, she wrote, “Swim team,” and added the hashtags “Cyprus”, “bye summer” and “coral bay”.

A few days ago, Gabriella Demetriades shared a bunch of pictures in which she revealed that she is making memories in Cyprus, calling it her “home.” The model-actress flew to Cyprus last week and has since been posting stunning images of herself and the picturesque locations.  In this post, Gabriella is chilling on the beach and wrote in the caption that she is being a “tourist at home”.

In another picture, Gabriella Demetriades was also seen spending some quality time with her son. In the caption, the doting mother said, “Rare sighting of a smiling Arik caught on camera,” with the hashtag “Cyprus”. Reacting to the image, actress-model Shibani Dandekar wrote, “What a gorgeous picture.”

In another picture, she posed on a farm and added the caption: “Farm girl for a day.”

Take a look at some of the other images from Gabriella Demetriades’ Cyprus trip.

The South African model is known for her work in films such as Sonali Cable and Oopiri. Gabriella Demetriades is dating actor Arjun Rampal and the couple welcomed their first child, Arik, in 2019.  Arjun Rampal was previously married to model Mehr Jesia.

Arjun Rampal is known for his work in films such as Dil Hai Tumhaara, Asambhav, D-Day, Chakravyuh, Inkaar, Om Shanti Om, Rock On!, Housefull, Raajneeti and Ra.One. He was last seen in the courtroom drama Nail Polish with Manav Kaul.