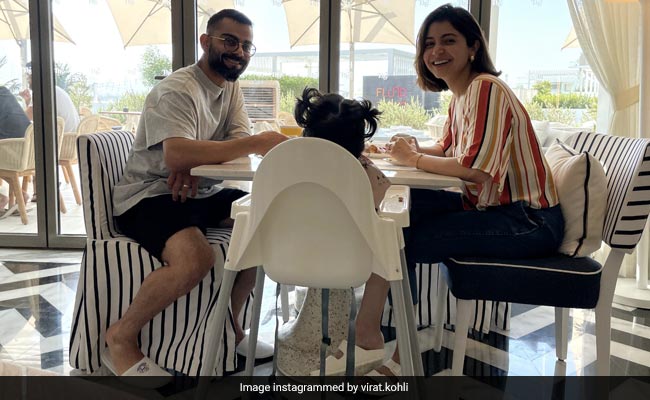 We are loving how frequently star couple Anushka Sharma and Virat Kohli have started sharing pictures of their daughter Vamika, who they welcomed in January this year. On Wednesday, Virat Kohli shared a super cute picture, in which the family of three can be seen at a dining table. While, Anushka and Virat can be seen smiling with all their hearts, we got a glimpse of little Vamika. No caption needed. Virat Kohli simply added a heart emoji. Virat’s post arrived just a few days after Anushka shared a picture of Virat and Vamika and she wrote: “My whole heart in one frame.”

This is what Virat Kohli posted:

On Ashtami, Anushka Sharma shared a precious picture of Vamika and wrote: “Making me braver and more courageous every day. May you always find the strength of the goddess in you my little Vamika. Happy Ashtami.”

Actor-producer Anushka Sharma and her cricketer husband Virat Kohli welcomed their first child, a baby girl on January 11, this year and the star couple named her Vamika. The couple met during the shoot of a shampoo commercial and they got married in an intimate ceremony in the presence of a few family members in Tuscany, Italy in 2017.