Skip to content
Bollywood Movie
October 21, 2021
admin
Leave a Comment on Bipasha Basu’s Maldives Posts Are All About Neon Love 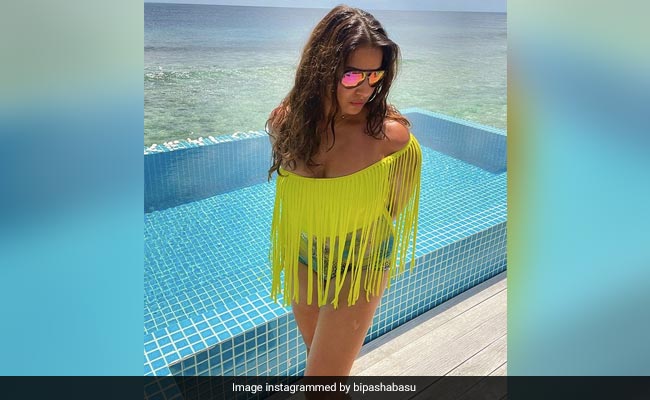 Bipasha Basu, true to her captions, has been focusing on self love and her Instagram posts prove that. Another thing that the actress seems to dig these days are neon shades (especially neon green). The actress posed a set of stunning pictures from the island nation, in which she can be seen dressed in a fringed neon green poncho of sorts. Bipasha accessorised her look with glasses and a bright smile. She captioned the post: “Toasty! #loveyourself.” Before that she decided to hit the beach in a neon green kaftan. Verdict: Equally good. She wrote “Neon” in her caption and dropped a heart emoji.

Bipasha Basu’s husband Karan Singh Grover’s Maldives look has been all about getting that tan. Oh, and also some “sun, sand, sea and spice… The bare necessities” and a “floating lunch.

Bipasha Basu met Karan Singh Grover during the shooting of the 2015 film Alone. The couple got married on April 2016 as per Bengali traditions. They later hosted a reception for their industry friends, which was attended by several Bollywood stars. The couple co-starred in the web-series Dangerous.

Bipasha Basu was a presenter on the TV show Darr Sabko Lagta Hai. The actress is best-known for her roles in films such as Dhoom 2, Dum Maaro Dum, Race, Omkara, Bachna Ae Haseeno and Raaz, among others.

Karan Singh Grover has been a part of many TV shows including Dill Mill Gayye, Qubool Hai, Kitni Mast Hai Zindagi and Dil Dosti Dance, to name a few. He starred as Mr Bajaj on Ekta Kapoor’s TV show Kasautii Zindagii Kay 2 for some time. After he quit the show, Karan Patel stepped into his shoes.