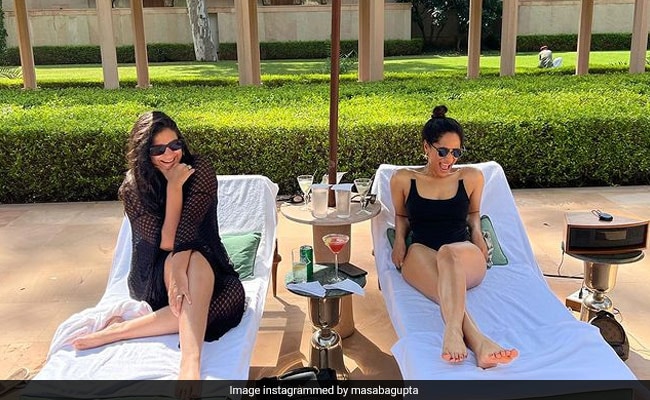 Rhea Kapoor and Karan Boolani are chilling in Ajabgarh with their friend and fashion designer Masaba Gupta. Karan Boolani celebrated his birthday today at the luxury resort Amanbagh, which is located at the foot of the Aravalli Hills in Rajasthan. Glimpses of their getaway have been shared on social media by Rhea Kapoor, Masaba and Karan Boolani. On Wednesday evening, Rhea Kapoor posted a couple of pictures of herself, Masaba and Karan chilling in a pool and wrote: “Pool days are the best days.” Masaba also shared a photo of herself and Rhea and captioned it: “Before seasons change.”

Check out the pictures of Rhea Kapoor and Masaba Gupta from Ajabgarh here:

Earlier on Wednesday, Rhea Kapoor wished Karan Boolani with this loved-up note: “Happy birthday to my partner in everything. Every year with you is more magical and fulfilling. There’s no one I would rather grow up with. I love you so much.” The two first met on the set of a film. They dated for 12 years before getting married earlier this year.

Sharing photos of himself from Amanbagh today, Karan Boolani wrote this on his Instagram profile: “Could not think of a better way to spend my birthday.”

Masaba Gupta is a celebrated fashion designer, who made her acting debut with web-series titled Masaba Masaba last year. She will next be seen in the second season of the series.