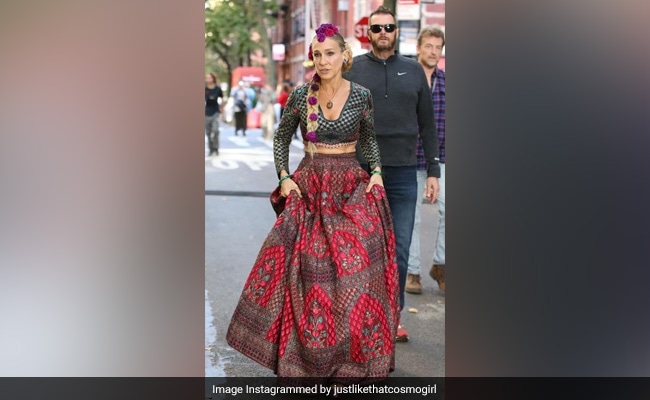 To say it in the style of OG fashionista Carrie Bradshaw, once upon a time in a magical land called Manhattan a young woman was photographed on the sets of And Just Like That in a lehenga and she surely did make a statement. Alright, we will lose the sparkle and come to the point. So Sarah Jessica Parker was spotted dressed in a Falguni And Shane Peacock lehenga on the sets of And Just Like That, which is the sequel to the popular TV show Sex And The City. Sarah Jessica Parker picked a red lehenga, which she topped with a green blouse. Any fan would know that Carrie takes her headgears and hats very seriously. So she accentuated her look with a braid and some flowers that she accessorised it with.

And Just Like That, a revival of the hit show Sex And The City, will air on HBO Max in December and it will showcase the story of Carrie Bradshaw (Sarah Jessica Parker), Miranda Hobbes (Cynthia Nixon) and Charlotte York Goldenblatt as they navigate love and friendship in their 50s.

Kim Cattrall, who played sexually liberated publicist and one of Carries’s besties Samantha Jones, is not a part of And Just Like That. Chris Noth has reprised his role as Carrie’s husband or Mr Big as she lovingly called him. Willie Garson, who starred as Carrie’s other bestie Stanford Blatch, was also meant to be a part of the series. However, he died at the age of 57 in September this year. Sarah Jessica Parker posted a eulogy for the actor and an excerpt from her post read: “It’s Been Unbearable.”

Well, we can’t wait to see what the show has in store for us. Especially Carrie’s wardrobe. We know she still owns the Manolo Blahniks that Aidan’s dog Pete almost ruined.

November 30, 2021
admin
Leave a Comment on Priyanka Chopra Is Always “The Star Of The Show.” See Her And Nick Jonas Being Adorable At British Fashion Awards

November 29, 2021
admin
Leave a Comment on Tributes From Sussanne Khan, Gigi Hadid And Stars Across The World

November 29, 2021
admin
Leave a Comment on To Virgil Abloh, From Natasha Poonawalla Who Wore His Designs