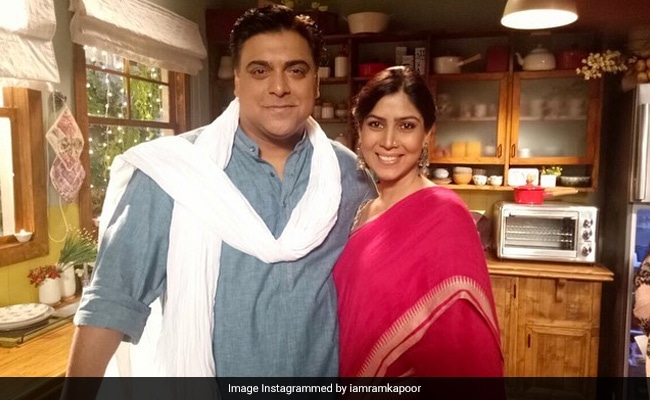 Ram Kapoor is missing his Bade Achhe Lagte Hain co-star Sakshi Tanwar a lot and his latest entry on Instagram proves it. The 48-year-old actor, on Tuesday, posted a set of pictures of himself and Sakshi Tanwar and wrote: “Tanwarrrrr… missing you yaar!!” The photo appears to be from the duo’s get-together. Sakshi looks pretty in a pink saree in the images while Ram Kapoor can be seen sporting a traditional outfit. Ram Kapoor’s wife and actress Gautami Kapoor dropped red heart icons in the comments section of his post. Bade Achhe Lagte Hain aired on Sony TV from 2011 to 2014. Ram Kapoor and Sakshi Tanwar played a married couple on the show.

Bade Achhe Lagte Hain 2, which is a reboot version of the original show, recently premiered on Sony TV. It stars Nakuul Mehta and Disha Parmar in the lead roles.

Talking about Ram Kapoor, he has also featured in shows such as Kyunkii… Saas Bhi Kabhi Bahu Thi, Dil Ki Baatein Dil Hi Jaane and Kasamh Se. Apart from small screen, Ram Kapoor has also worked in movies such as Student Of The Year, Shaadi Ke Side Effects, Karthik Calling Karthik and Baar Baar Dekho. He was last seen in Abhishek Bachchan’s The Big Bull. He also played a pivotal role in Mira Nair’s A Suitable Boy.

Sakshi Tanwar is best-known for playing the role of Parvati in Kahaani Ghar Ghar Kii that started in October 2000 and concluded after eight years. Sakshi Tanwar featured alongside Kiran Karmarkar, who played her husband Om, Kavita Kaushik, Suchita Trivedi, Shweta Keswani and others in the show that fetched her many awards.