Skip to content
Bollywood Movie
September 30, 2021
admin
Leave a Comment on Pic From Kajol, Tanishaa Mukerji And Tanuja’s “Best Holiday Together So Far” 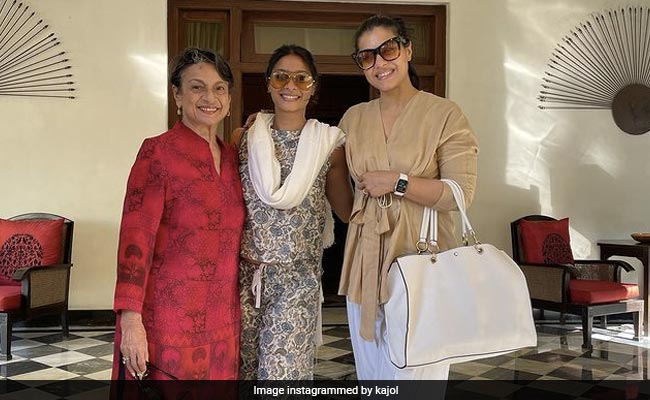 Kajol’s bond with her sister Tanishaa Mukerji and mother, veteran actress Tanuja is well-known. Kajol has often been vocal on social media about how close she is to both of them. Now, the actress has shared a picture with her mother and sister much to fans’ delight. Surprisingly, she chose to share the image not on the occasion of Daughters’ Day but on Sons’ Day. Kajol even gave a reason for this in the caption. She wrote in a sweet note, “Daughters’ Day is every day for us but I heard a birdie say that today was Sons’ Day…What say, mom? You wanna wish us?”

In the snap, the three women are seen posing for the camera, arm-in-arm. Along with the image, Kajol added the hashtags, “moms and daughters” and “best holiday together so far.” Fans of the actress loved the post and reacted to it with heart and smile emojis.

Recently, on the occasion of Tanuja’s birthday, Kajol brought a smile to our faces by sharing a montage video. The video contains several pictures, both vintage and new, of the mother-daughter duo. Sharing the clip, Kajol wrote, “The real Tedhi Medhi Crazy amazing woman in my life. Cheerleader to life coach and my best friend. Lucky to be your daughter. I love you, mommy. Happy Birthday.”

That’s not all. Kajol posted another photo featuring herself and Tanishaa giving Tanuja a peck on her cheek. “Happy happy birthday. Celebrations continue.” She also added the hashtag, “three of a kind,” her caption read.

Just a few weeks ago, Kajol treated us to a picture of the happy trio and called themselves “the Three Musketeers”. She added in the caption, “Always together…Us vs them.”

Kajol also shared a frame from her pre-birthday celebration in August, this year. This time it was a group selfie clicked by her mommy dearest. “Trying to fit all three expressions in one frame is impossible. Thank you, Tichi, for this wonderful happy pre-celebration. Love you both to bits.”

Reacting to the image, Tanishaa Mukerji said, “Yesss, I look so satisfied with lunch. I am ready to pass out … yum.”

Kajol made her debut with the 1992 film Bekhudi. She is best known for her roles in movies such as Baazigar, Dilwale Dulhania Le Jayenge, Kuch Kuch Hota Hai, and Kabhi Khushi Kabhie Gham… She was last seen in Tribhanga.