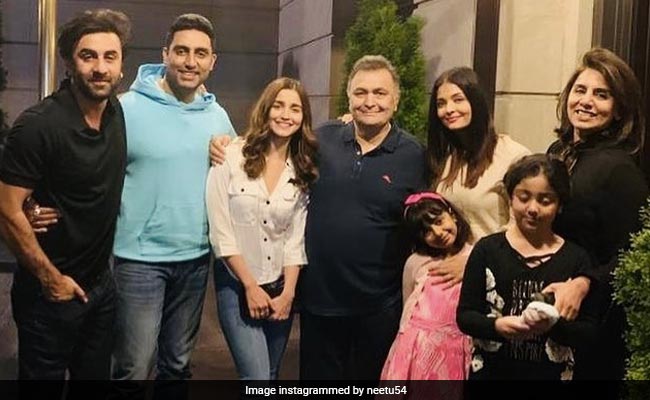 Born into one of the most influential film families in the country, Ranbir Kapoor turns 39 today. A much-loved star, Ranbir has comfortably balanced commercial as well as character-oriented cinema. From the iconic towel dance in his debut film Saawariya to his portrayal of actor Sanjay Dutt in Sanju, Ranbir has cemented a place in our hearts with his craft. And when not acting, he prefers to spend time with his loved ones. Let’s celebrate Ranbir Kapoor’s birthday by revisiting some of his most special memories with his girlfriend, actress Alia Bhatt, and his family. Take a look:

It’s official: Putting rest to all the speculations, Ranbir Kapoor and Alia Bhatt made their couple debut in the summer of 2018. The duo made a stunning entry to attend Sonam Kapoor’s wedding reception.

Ranbir Kapoor and Alia Bhatt went for dinner in the company of his parents, Rishi Kapoor and Neetu Kapoor, and sister Riddhima Kapoor Sahani. The couple is often seen spending time with family at intimate gatherings.

This is the first picture of Alia Bhatt on Neetu Kapoor’s Instagram timeline. Momma’s boy Ranbir Kapoor has often expressed in public that it is of paramount importance to him that Neetu Kapoor approves of the girl in his life.

What a perfect way to ring the New Year. The family cheers to 2019 together in New York.

A usual celebration gathering at the Kapoor household. Christmas 2019 was all about merrymaking when the entire family sat for lunch.

Neetu Kapoor had the sweetest way to bless the new couple. Ranbir Kapoor and Alia Bhatt hold up their Filmfare Awards while looking at each other like that.

While it was majorly Neetu Kapoor who was there with her late husband, actor Rishi Kapoor during his treatment days, Ranbir Kapoor would often jet off to New York to be with his father.

Remember the Brahmastra drone show where the makers revealed the film’s logo? This picture was clicked after the launch event. The movie will see Alia Bhatt and Ranbir Kapoor share the screen space for the first time.