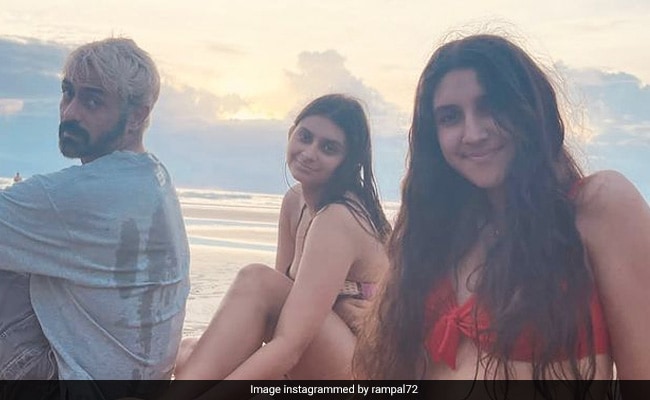 Bollywood actor Arjun Rampal needs no special day to give a shout-out to his beautiful daughters Mahikaa and Myra. The doting father never misses out on an opportunity to shower love on his daughters. We have often seen the beautiful sisters featuring on Arjun Rampal’s Instagram timeline. Now, on International Daughters’ Day, the actor decided to upload a throwback frame of the three at a beach. Arjun Rampal, Mahikaa and Myra are sitting on a mat and smiling for the camera. The actor’s caption was a heartwarming note. It read, “My girls. My daughters. The most precious gifts bestowed upon me. I am blessed. Thank you, my munchkins.”

Mehr Jesia, Mahikaa and Myra’s mother, also posted a throwback picture to celebrate the day. For the caption, she decided to go with two red heart emojis. Mehr Jesia and Arjun Rampal separated in 2018 after almost two decades of marriage.

Now, lets us focus on Arjun Rampal’s Instagram page. Last month, the actor uploaded some beautiful moments from their family holiday. The opening photo features Myra, Mahikaa and their father. In the next slide, we also see the actor’s girlfriend, model Gabriella Demetriades. Don’t miss their little son Arik in the photo. “Time well spent,” read the caption.

Check out the pictures from their vacation diaries:

During his trip to London, Arjun Rampal spent some quality time with Mahikaa. In the snapshots, we see Mahikaa resting her head on her father’s shoulders. Arjun Rampal wrote in the caption, “The bond. My baby girl jaan. Mahikaa Rampal love you beyond.”

Arjun Rampal never misses a chance to gush about his children. When it was time for Arik’s second birthday, the actor left a touching post on Instagram. The photos give us adorable glimpses of the father-son duo. Gabriella Demetriades, Mahikaa and Myra are also spotted in the album. Have a look:

Arjun Rampal will be next seen in Dhaakad. The film features Kangana Ranaut in the lead role.