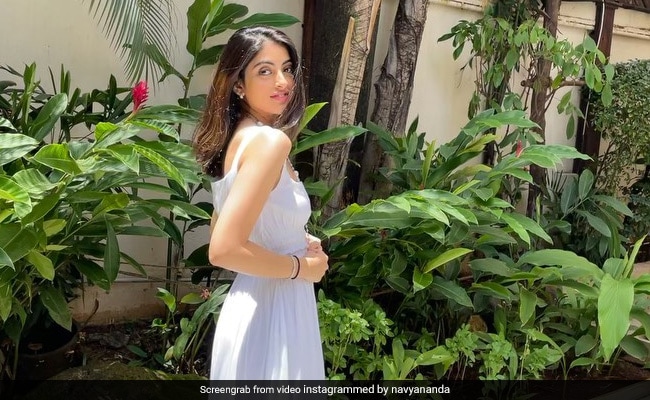 When you have a tight group of girlfriends, you really do not need a team of cheerleaders. Proving this once again is Navya Naveli Nanda and her friends, actress Ananya Panday and Shanaya Kapoor. Navya, who is the granddaughter of veteran actors Amitabh Bachchan and Jaya Bachchan, has been a social media darling for a long time now. So, it was no surprise that fans flocked to Navya’s Instagram timeline when she dropped a bunch of images and videos. And as expected, Navya’s friends Ananya and Shanaya were among the first users to leave a comment below the photo.

For the post that showed her in a dainty dress, Navya Naveli Nanda kept the caption simple with just a white dove emoticon. Reacting to the upload and presumably, in response to Navya’s caption, Shanaya Kapoor said, “Vultures are coming,” and tagged Ananya Panday. Ananya responded to the cryptic comment with an equally intriguing yet cheeky response. She said, “Shanaya Kapoor, for the little sparrow.” Navya, too,  chipped in to say, “Relax.”

Previously too, we have caught glimpses of the camaraderie between Navya Naveli Nanda and her girl gang on social media. Shanaya Kapoor had given us all a peek into the fun they have when they get together. In the images shared on Instagram, the three friends are seen goofing around wearing matching clothes. Along with the post, Shanaya wrote, “My kinda crazy.”

Ananya Panday, too, had shared some images of the three beauties partying, this time with Suhana Khan, daughter of actor Shah Rukh Khan. “Nothing really changes (except I don’t bite Suhana’s head anymore…Ok, maybe I do sometimes ),” she wrote.

Ananya Panday will be seen in a film with Deepika Padukone and Siddhant Chaturvedi. The movie is directed by Shakun Bhatra. Shanaya Kapoor will soon be making her acting debut under the banner of Dharma Productions. Navya, on the other hand, is an entrepreneur with initiatives aimed at addressing gender issues as well as health sector development. We absolutely love watching the girls have fun and cannot wait to see what they have in store in the future.