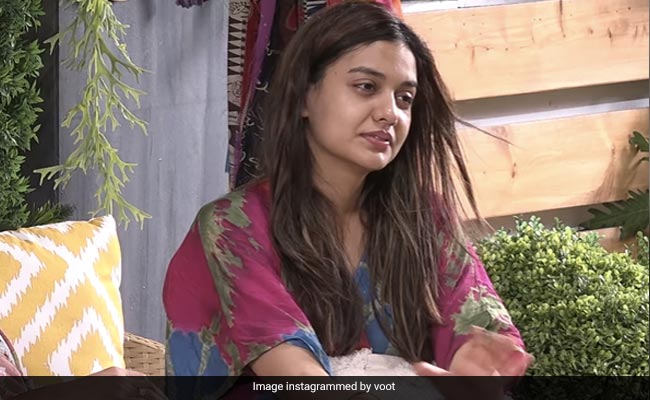 Bigg Boss OTT: Divya Agarwal in a still from the show

Bigg Boss OTT is grabbing all the attention on social media. This time, the reason is participant Divya Agarwal. The actress has been the talk of the Internet due to her fierce presence in the show. In the recent promo, Divya was pinned to the floor by four other contestants and this has created a stir on social media. The 28-year-old was pushed on the floor by Neha Bhasin, Moose Jattana, Nishant Bhat and Pratik Sehajpal. Many of the fans slammed the co-participants for mobbing and attacking Divya in the task performed in the Karan Johar-hosted show.

Divya’s other two co-housemates, namely Akshara Singh and Milind Gaba, were the only ones to raise voice against this attack. One of the fans appreciated Divya’s resilience and commented, “Divya is the strongest and most real.” A viewer reacted to the video as, “Divya is so strong.” Another wrote, “Divya always rocks.”

Not just fans, Divya Agarwal’s boyfriend Varun Sood too opposed the attack and called it “hinsa” [violence]. The VJ-athlete wrote on Twitter, “Pushing someone is “hinsa.” Two people pinning someone down is also “hinsa.” He added, “Divya Agarwal isn’t so weak. Hence, she did not make a big deal about it. She has trained under Pro MMA Fighters. But I’m again mentioning, pinning down is “hinsa”.”

Pushing someone is “hinsa”
Two people Pinning someone down is also “hinsa”@Divyakitweet isn’t so WEAK! hence she didn’t make a big deal about it. She has trained under Pro MMA Fighters.

But im again mentioning, pinning down is Hinsa! @justvoot@VootSelect@EndemolShineIND

Later, for another task, Divya Agarwal, Milind Gaba and Akshara Singh grooved to the Money Heist 5 anthem, which was released by Netflix India last week.

Divya Agarwal rose to fame after her participation in the reality show MTV Splitsvilla season 10.  She has also featured in the horror web series Ragini MMS: Returns.