Skip to content
Bollywood Movie
August 30, 2021
admin
Leave a Comment on Abhishek Bachchan Has Hand In A Cast But It’s Business As Usual. See What He Posted 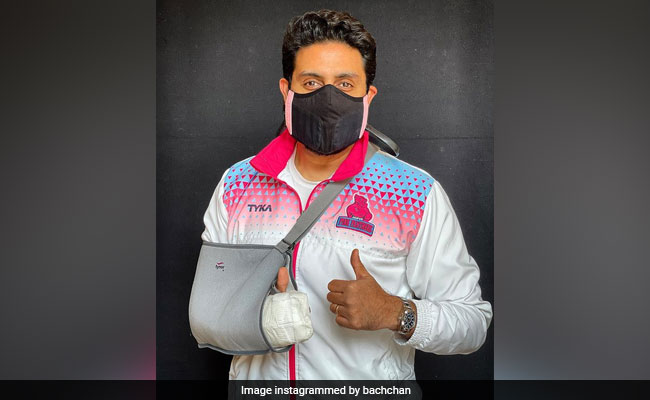 There’s no stopping Abhishek Bachchan from his work commitments, not even an injury. The actor, who recently fractured his right hand, is busy with work. The actor, who owns the team Jaipur Pink Panthers in Pro Kabaddi League, posted a picture of himself with his hand casted. “All set to start the Pro Kabbadi season 8 auction,” he wrote sharing a masked picture of himself. The actor’s family members formed his cheer squad. His sister and author Shweta Bachchan Nanda wrote: “All the best G.” His brother-in-law Kunal Kapoor commented: “All the best.” The 45-year-old actor’s niece and entrepreneur Navya Naveli Nanda dropped raising hands emoji.

A few days ago, Abhishek Bachchan revealed that he suffered a hand injury and wrote in his post: “Had a freak accident in Chennai on the set of my new film last Wednesday. Fractured my right hand. Needed surgery to fix it! So, a quick trip back home to Mumbai. Surgery done, all patched-up and casted. And now back in Chennai to resume work. As they say… The show must go on! And as my father said… Mard ko dard nahin hota! Ok, ok, ok it hurt a little. Thank you all for your wishes and get-well-soon messages.”

Abhishek Bachchan will next be seen in a film based on Bob Biswas, which is being produced by Shah Rukh Khan’s Red Chillies Entertainment. The actor recently starred in The Big Bull. Last year, he featured in Anurag Basu’s Netflix film Ludo and Breathe: Into The Shadows, which marked his digital debut. He will reportedly star in Gulab Jamun, co-starring his wife Aishwarya Rai Bachchan. The actor will also star in a film called Dasvi with Yami Gautam and Nimrat Kaur.

Abhishek Bachchan is best-known for his performances in hits like the Dhoom series, Bunty Aur Babli, the Sarkar series, Dostana, Bol Bachchan and Bluffmaster!, to name a few. The actor was equally adept at garnering praise from film critics for his performances in films like Guru, Yuva, Delhi-6, Kabhi Alvida Naa Kehna and the National award winning film Paa.